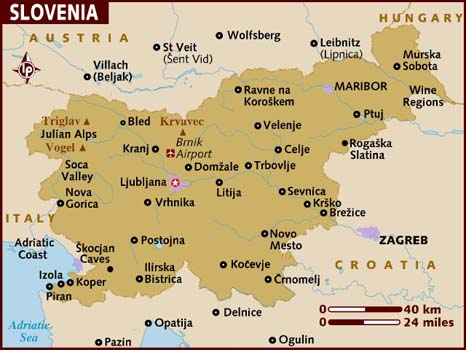 The Republic of Slovenia left Yugoslavia in 1991, publishing one-sided Declaration of independence. But sovereignty was recognized by neither the European Union nor the United Nations until 1992. In the north it borders with Austria, in the west with Italy, in the east with Hungary and in the south with Croatia. Most of the country lies in the Karst and the Julian Alps. Although farming and animal husbandry are major occupations, Slovenia is highly industrialized and urbanized country. Metallurgy of iron, steel and aluminum is active. Slovenia exploits oil and coal. Tourism is a significant industry in this country. Once seen sight of the Julian Alps forever remains in memory and Karst cave became famous around the world thanks to its beauty. In the southwest truly great and well-known wines are made. One of the biggest successes of the state is considered to be the entry into the EU.