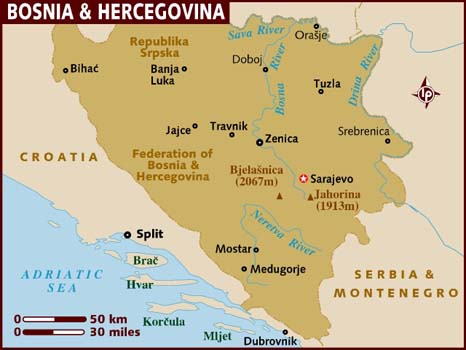 Bosnia and Herzegovina, the former Federal Republic of Yugoslavia, was formally recognized as an independent state in 1992. This is mostly a mountainous country and it includes part of the Dinaric Alps, covered with thick forests and intersecting rivers sailing to the north, to the river Sava. Half of the country is covered with forests. In the north, timber is one of the most important products, while in the south those are tobacco, cotton, fruits and grapes. Bosnia and Herzegovina has large supplies of coal, iron ore and bauxite, but its industry is shaky. This landlocked country is ethnically the most diverse of all the former Yugoslav republics. Population are Bosniaks (Bosnian Muslims), Serbs and Croats. The economy is at a standstill and the majority of the population depends on the help of the United Nations.