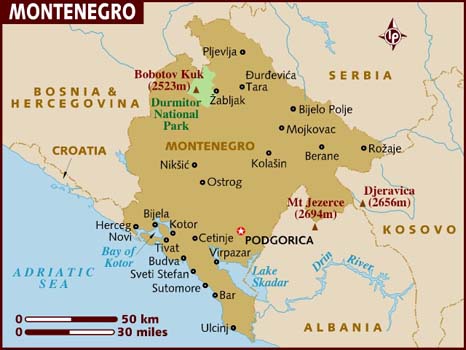 The Republic of Montenegro is located in Southeastern Europe. After the disintegration of the Federal Republic of Yugoslavia, it was in the union with Serbia for some time, but because of the unstable political situation this union could not survive, and Montenegro declared independence in 2006. From the north it borders with Bosnia and Herzegovina, in the west Croatia, Albania in the south and Serbia in the north. It is separated from Italy by the Adriatic Sea. Climate in this country ranges from the Mediterranean (at the coast) to the mountainous (at the interior). The Mediterranean climate is characterized by dry and warm summers and mild and rainy winters. In the mountainous areas in the north summers are usually hot and humid and winters are long and harsh. The population of Montenegro is mostly engaged in agriculture. In addition to mountain tourism, the costal is also very developed.