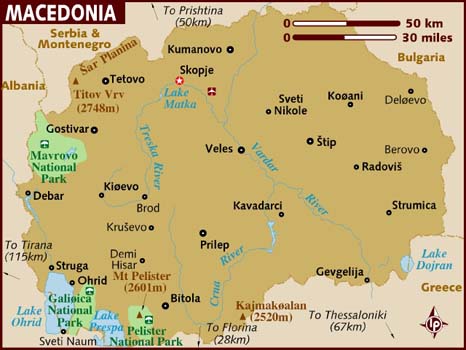 The Republic of Macedonia declared its independence from Yugoslavia in 1991. However, Greece objected to the UN because of the official name of the country, since Macedonia is called a neighboring Greek province, and the UN refused to recognize Macedonia's statehood. However, this global organization changed her mind in 1993, as the country has tentatively taken the official name of the Former Yugoslav Republic of Macedonia (FYROM). The landlocked country shares its borders with Albania, Serbia, Montenegro, Bulgaria and Greece. At its mountainous terrain perceive deep valleys and three large lakes. The climate is characterized by hot and dry summers and relatively cold winters. Macedonia’s income comes from agriculture and coals.