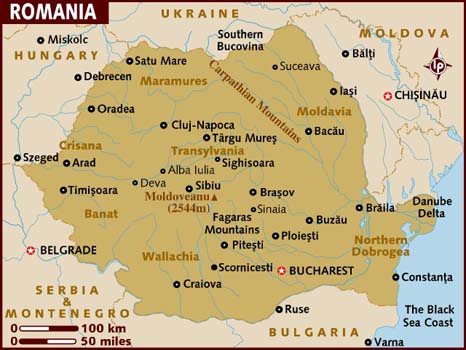 The Republic of Romania is country of Southeast Europe, at the Black Sea. It has borders with Ukraine, Hungary, Serbia and Bulgaria. Carpathians extend through the north, east and center of Romania. Carpathians are surrounded by a ring of fertile lowlands, flat in the south and west, and undulating in the east. The heart of Romania is province of Transylvania inside of the Carpathian arc. The climate is characterized by cold and strong winters, on the one hand, and hot summers, on the other. In Romania, husbandry is neglected in favor of its industry: however, there are some maize, sugar beet, wheat, potatoes and viticulture. A good part of the industry is still state-owned. Beside the mines, there are metallurgy, mechanical engineering and chemical industries. Dense forests provide timber and materials for furniture factory in the Carpathians.