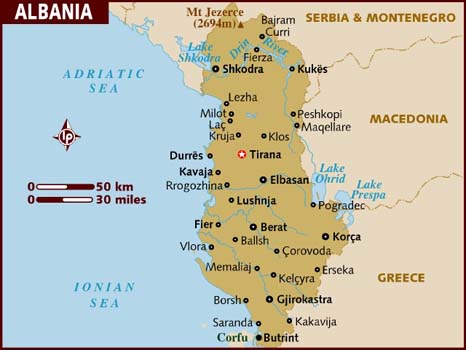 The Republic of Albania is a small mountainous country in the Eastern Mediterranean. The nearest neighbors are Serbia and FYROM. Its west coast is on the Adriatic Sea. The climate is typically Mediterranean, and although rain falls mainly in winter, there is often strong thunder across the plains in summer. Winters are harsh in the mountains and there are frequent heavy snowfalls. The main agricultural areas are located along the Adriatic coast and in the basin of Korcha. Industrial performance is negligible. Albanians are principally engaged in the processing of agricultural products, textiles, oil and cement. Much of the trade is done with neighboring countries - Serbia and FYROM. After the fall of the communist government in 1990, the production has drastically declined.