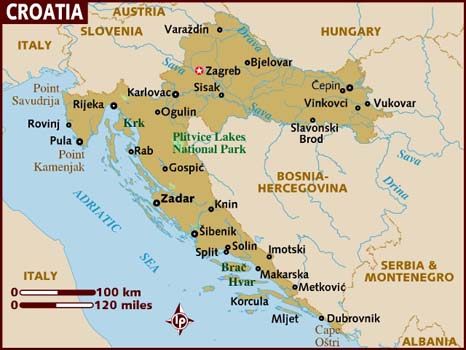 The Republic of Croatia declared independence in 1991 and in 1992 it was formally recognized by the European Union and the United Nations. It is located in southeastern Europe; in the west Croatia has access to the Adriatic Sea, in the north it borders with Slovenia and Hungary, in the south with Bosnia and Herzegovina and in the east with Serbia. The west of Croatia is covered with the Dinars Mountain. The Eastern lowland is irrigated by Sava and Drava and its land is arable. The main agricultural area is ​​the Pannonian plain. More than one-third of the country is covered by forests; wood is an important export product. Stocks of coal, bauxite, copper, oil and iron ore are substantial and the majority of state-owned industries are based on their processing. In the southwest of Istria and the Dalmatian coast tourism is highly developed and entering in the European Union has brought major changes in all areas.